The energy intensity of ancillary equipment used in the comminution circuit (conveyors and pumps) has been integrated into CEEC’s suite of energy curve tools to produce a more comprehensive energy intensity curve.

This is the second of 10 energy curve enhancements to be completed by researchers at SMI-JKMRC as part of the $469,000, three-year CEEC Advanced Energy Curves Project. Funded by the Queensland Government, METS Ignited (an Australian Government Industry Growth Centre) and the mining industry via CEEC, this project is being led by Senior Research Fellow, Dr Grant Ballantyne.

Although the energy consumption of ancillary equipment has been collected for around 20% of mines recorded in the comminution energy curve database, this data has not been previously included in the published curves. Using a methodology validated by the existing data, Grant determined that the energy intensity of conveyors could be approximated to 0.40 kWh/t per kilometre, and that the average energy required to pump slurries from the outlet of a SAG mill to an elevated cyclone nest was 1.6 kWh/t.

Grant said assessment of comminution energy intensity had traditionally been confined to the crusher and mill motor energy consumption. However, in order to fairly compare disparate equipment types and circuit configurations, a measure of ancillary equipment energy consumption was required.

“For instance, dry comminution circuits, such as those incorporating high pressure grinding rolls (HPGR), may have an energy advantage in rock breakage but can use more energy in material transport as they typically require an extensive conveyor system. In contrast, wet milling circuits use less ancillary energy as they usually require fewer conveyors,” he said.

“Both circuits typically require similar sized slurry pumps, unless more efficient classifiers are employed to reduce the circulating load around the ball mill. If the energy consumption of the ancillary equipment is not taken into account, wet grinding circuits may be at a significant disadvantage in direct energy consumption comparisons.”

Not only are sites now able to more accurately benchmark the energy intensity of their comminution circuits using the updated energy curve, but when looking to upgrade their circuits, they can use the energy intensity statistics for conveyors and pumps to compare various circuit configurations. 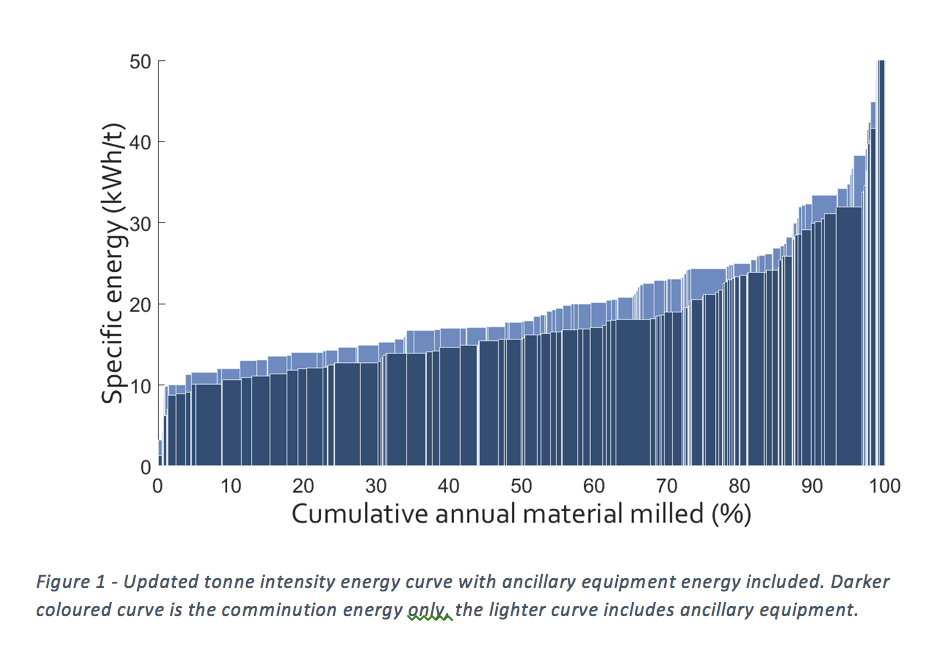